Cochrane shows up for candidates at open house

You are here:
Uncategorized 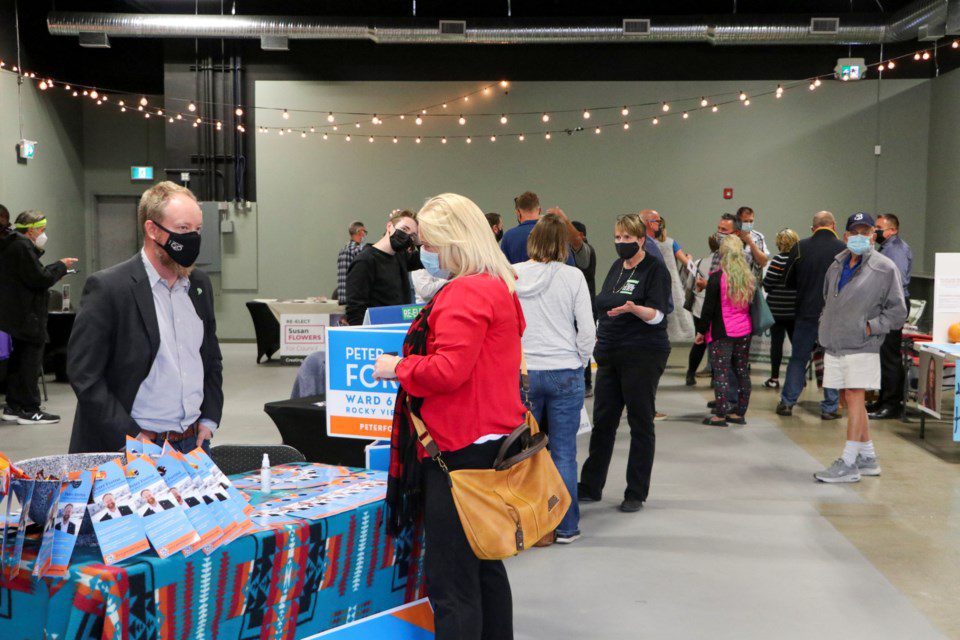 A meet-and-greet was held at The Social Spot and around 50 people came to ask questions of the candidates. Twelve of the 19 town council candidates and all three Rocky View Schools Ward 6 candidates were present and answering questions at socially distanced tables.

Traffic congestion, population growth, infrastructure, and a river wave park were some of the topics up for discussion at the Town of Cochrane candidates open house on Oct. 5.

A meet-and-greet was held at The Social Spot and around 50 people came to ask questions of the candidates.

Twelve of the 19 town council candidates and all three Rocky View Schools Ward 6 candidates were present and answering questions at socially distanced tables.

Event organizer and owner of Quirk Social, Kailey Mitchell, said she felt it necessary to have an in-person open house event because of the large number of candidates on the town council ballot this year.

“As an event coordinator, I obviously prefer the interaction between people versus the virtual side of things,” she said. “I think you can get a better feel for who people are that way for sure. So, this kind of gives them that opportunity to meet with people in person and for people to ask their hard-hitting questions.”

Mitchell said she did not want to host a traditional forum and was happy to leave that in the hands of the Cochrane and District Chamber of Commerce, who are hosting a virtual forum with the help of CochraneNow who will live stream the event from their website on Oct. 12 from 6 to 8 p.m.

Former chamber employee and honorary chamber member Chuck Collins helped organize an all-candidates forum for the 2019 federal election and said he was considering doing the same for the municipal election this year if one did not come to fruition.

“We’ve got so many candidates running, I don’t know 80 percent of them,” Collins said. “I’m trying to figure out who’s who and where they stand on some issues. I want to find out where people are in regards to growth and how we’re going to manage it.”

Collins, who has lived in Cochrane for 31 years, said he wants to see the next council review the idea of splitting up neighbourhoods into wards, like the City of Calgary has done, where each councillor oversees a specific area.

“It might be wise to consider a format where each councillor looks after a certain region or area like in Calgary or other cities. I think that we’re at the point where whatever the issue is, it could go to that councillor specifically, about the region that they’re most familiar with.”

Lucille Johnsrude and Erika Richards, who are with the Cochrane and Area Events Society, went to the open house to hear more from candidates about the Cochrane Tourism Association’s proposal of a river wave park, they said.

Many council candidates are in opposition to the proposed project, which would see new mechanical technology capable of creating an adjustable wave built on a section of the Bow River. Council candidate Bruce Townley leads a Facebook group titled ‘No Wave Park Cochrane’ which has nearly 200 members.

Richards said she would like people to give the idea a chance.

“People like to scream and yell on Facebook and have a tantrum,” Richards said. “Let’s go through the process before people condemn it. Some people have said they’re not in favour of it but they’ve just done the study and the survey of people, so can we not look at the results first?”

Richards said she also has a keen interest in each candidate’s ability to be fiscally responsible to keep taxes from going up during a time where inflation is going through the roof.

Johnsrude has lived in Cochrane for 28 years and said she has seen the town’s population explode and its infrastructure lag slowly behind.

“That’s the big thing is that I’ve lived here for almost 30 years and we’ve talked about doubling up the lanes on that road [the Highway 1A] for that long,” she said.

She applauds the Town for taking the Highway 1A project into its own hands to double up eastbound and westbound lanes from Centre Street to 5 Street, after years of discussion and lobbying with the provincial government to help relieve traffic congestion.

The work, which extends from the bottom of the hill just east of Centre Street and will eventually lead to the Highway 1A/22 interchange that the province will start building in the spring, is estimated to cost $13.8 million, with most of it coming from a combination of borrowed and reserve money from the Town of Cochrane and $3.48 million coming from a provincial grant.

“At least we’re sort of taking a little bit into our own hands and I commend them for that, and I don’t know if that means our taxes are going to go up but you know what, we have played the ‘we can’t afford it’ for so many years that we can’t afford not to do a lot of the infrastructure that has been left behind.”

Cochranites will vote in the upcoming municipal election on Oct. 18, with early polls opening on Oct. 9. More information on voting and polling stations can be found at www.cochrane.ca/election.